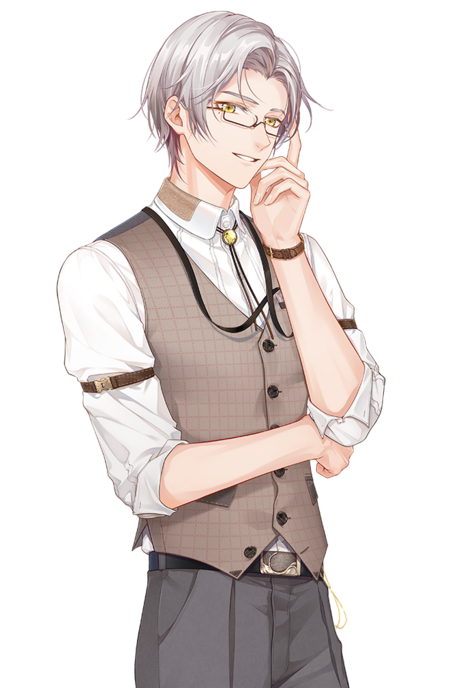 You are the quietly blooming secret inside my heart
Day after day, the people of this world stage the acts of their sorrows and joys. Only you are different from the rest.
During my voyage through the labyrinth of human emotions, I ran into you, and a rose began to blossom within my heart.
I believed that everything was under my control. Never did I expect to be "baited" by you.
I willingly fell deep into your trap. There is no hope for escape, yet I wish not to leave, so...
"You must take full responsibility, my dear rose."[4]

A psychologist who can see through all forms of disguises.

A top psychology expert who turned down all kinds of job invitations and decided to become a psychologist in Stellis City. Vyn is able to face anything with ease and skill, giving those around him a sense of peace, resulting in people involuntarily opening their hearts to display their truest self before him. If one's heart has secrets, they will most definitely be discovered by him.[2] As someone who always observed the volatile human emotions from the outside, Vyn never expected himself to become one with the same emotions.[5][6]

Vyn has a very gentle temperament, but he is not what one may imagine as a weak scholar. He is very reliable in critical moments, and with his ability to maintain a perfect disposition, any weakness he might have is unknown. Though he is young, he is a distinguished visiting professor at Stellis University[1][2]. If he cannot be found in the Giannovyn Mental Health Research Center, one may find him at Stellis University[2]. During his spare time, Vyn enjoys gardening, listening to classical music and baking desserts.

Vyn is frequently invited by Stellis University to give guest lectures and public classes, and he joined the staff as a visiting professor in 2030, agreeing to teach an elective course for an entire semester for the first time.[7] He is extremely popular at the university, especially among female students, who have formed a fan club around him;[8] his classes are noted to always be full, even at unpopular lecture times like Saturday mornings,[9] which can see lectures as large as approximately 180 people.[10]

Vyn is sometimes called "Vilhelm" by those who have connections to him from before he moved to Stellis, however he prefers his new name instead.[11][12] He's also treated with surprising amounts of respect in certain circles--more so than would seem to befit a psychiatrist, even a famous one.[11][12][13]

When asked about potential exhaustion in dealing with extreme causes of disorder and trauma so often, Vyn remarks that he doesn't feel tired because the source of trauma can always be treated, which is something that can't be said for physical injuries; he considers himself fortunate that he's a psychiatrist instead of a surgeon.[9] However, he is sometimes derisive of common human flaws, such as the tendency to prioritize selfish short-sighted personal gain while still rationalizing those same choices as logical and intelligent.[14] He's also extremely critical of flaws and defects in general, viewing objects as losing all value after being damaged.[15][16]

Vyn's schedule is well-known to be somewhat liberal due to his renown in his field, often not seeing him arrive for work at the Giannovyn Mental Health Research Center until the afternoon.[14] Rather than have a therapist of his own as many other mental health professionals do, Vyn has developed a self-evaluation technique involving the nightly[12] recording of audio diaries, from which he graphs and analyzes emotional indicators for fluctuations.[17]

Vyn believes strongly that overprotective and sheltering behavior toward a person prevents that person from growing to full potential.[18][19] He views the idea of love at first sight as undesirable due to past experiences,[17] but he admits he does believe in it and that he would handle it with restraint and cautious observation of a person's attitudes, views, and reactions to determine true character.[20]

Those who have known Vyn a long time remark that he rarely asks for help, especially for the sake of others, and that it would be "very unfortunate" to be treated as his enemy.[12]

Vyn's hobbies and interests include: 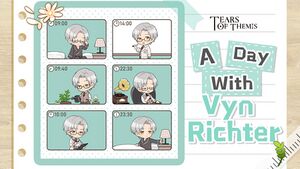 "People don't only start thinking when they're at their desk."

Unlike other young and famous people, Dr. Richter appears to spend a lot of time enjoying life. He takes each day as it comes, calmly and gracefully. Handling hospital work, police consults, and university classes with ease, Dr. Richter's professionalism and efficiency is admirable.[26]

Vyn Richter
"A Star in the Night"

Vyn Richter
"Aimed At Your Heart"

Vyn Richter
"Between Good and Evil"

Vyn Richter
"Fetters of the Past"

Vyn Richter
"Near and Far"

Vyn Richter
"A Hobby of Mine"

Vyn Richter
"Another Side of You"