Go to the Villa Hall to progress the story.

It has been three days since you all came to Blizzard Villa.

The worst snow in decades has completely trapped all of you within the mountain.

In recent days, all of you have been actively looking for ways to communicate with the outside world to no avail.

The guests' moods have all shifted from the original excitement to fear, as the uneasy atmosphere quietly spreads.

To ease everyone's mood, Mevis Zeng ensures that everyone will be protected and that the auction will proceed as scheduled.

And today is the day of the auction...

You: No progress has been made on Elijah Yin's case. We have been stuck here for several days with no contact from the outside world.

Luke: I will always protect you, no matter what happens.

Artem: There's always a solution. Don't put too much pressure on yourself.

Vyn: Do not worry, the truth will come to light. Sometimes, we just have to wait a little longer.

The guests in the living room begin to grow impatient.

Guest A: Why isn't Mevis Zeng here yet?

Guest B: Yes, I thought the auction was supposed to start today. How much longer do we have to wait?

It is already ten minutes past the originally scheduled start time. Some impatient guests are starting to get anxious.

Luke: Strange, where is Mevis Zeng...

Vyn: Could there be a reason to delay the auction? One that is too inconvenient to inform the guests about? 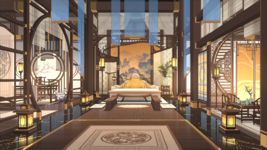 The treasure auction is about to start, but Mevis Zeng hasn't shown up. Ask the butler why.

Winters: Distinguished guests, how may I be of assistance?

Winters, the villa's butler, flashes his service smile as you all approach.

Artem: The auction is about to begin, but Mr. Zeng has yet to show up... Did something happen?

Winters: No, nothing has happened. Our master is just...

Guest A: Butler, is the auction going to happen or not? Can you tell us anything concrete?

Guest B: Yeah, we've all been waiting for a long time. Why hasn't Mr. Zeng shown up yet?

Winters is interrupted by other guests before he can answer Artem's question.

Winters is forced to calm everyone down as the impatient guests inquire about Mevis Zeng's whereabouts.

Winters: Our master is in his study sorting some things out. He should be here soon, so please be patient.

Marius: Sorting some things out?

Marius: What is so urgent that Mr. Zeng needs to sort it out himself and make so many guests wait for him?

Guest A: Exactly! We're all waiting for him. What is he sorting out that's so important?

Marius' skepticism is immediately echoed by the other guests.

Winters: It's true. Our master was talking about business with Mr. Zhang earlier.

Winters: They talked for a long time. Mr. Zhang didn't leave the study until the auction was about to start...

Winters: After that, our master stayed in the study and told us not to disturb him because he had to sort some things out.

As Winters says that, you notice one of the male guests in the crowd stiffening.

He unnaturally takes two steps back, as if wanting to avoid drawing attention to himself. It has the opposite effect, though.

Vyn: Do you mean that gentleman standing near the corridor?

Vyn has also noticed him. He points in that direction.

Winters: Yes, Mr. Zhang deals in antiquities. I think he wanted to talk business with our master.

Upon your arrival at the villa, you saw him exchanging pleasantries with an old professor of folklore.

Guest A: Sam Zhang, what were you talking about with Mr. Zeng in his study? Why hasn't he come out yet?

Guest B: Were you guys secretly trading antiques!?

Guest A: That won't do! If Sam Zhang dealt with Mr. Zeng under the table... Wouldn't it be our loss!?

Sam Zhang frantically tries to explain as more gazes are focused on him.

Sam Zhang: The previous generation of my family is on good terms with Mr. Zeng. I was just saying hello!

Guest A: I don't believe you. You only went to say hello and ended up talking for so long?

Guest B: Yeah, you must have talked about something else!

Sam Zhang hesitates, then after a long while, he sighs.

Sam Zhang: Here's the story. In my grandfather's early years, he mortgaged an antique vase to Mr. Nolan Zeng.

Sam Zhang: That vase is a family heirloom. My father died of illness last year... and he was still thinking about the heirloom.

Sam Zhang: I just wanted to ask Mr. Zeng if I could buy it back.

Sam Zhang: I talked to Mr. Zeng for a long time... but he never responded.

Sam Zhang: After that, I left because it seemed like the chances were slim.

Sam Zhang: I don't know what Mr. Zeng was doing alone in his study after that.

Guest A: So, you say! Where's your proof?

Artem: The truth behind what Mr. Zhang said doesn't really matter to everyone here...

Artem: More importantly, why hasn't Mr. Zeng shown up yet?

Artem: Everyone has been waiting for quite a while. Butler Winters, could you please fetch Mr. Zeng for us?

Artem's words are immediately echoed by many guests.

Winters: Well... Just a moment, distinguished guests. I will check on him now.

After a moment's hesitation, Winters nods and agrees with Artem's plan.

All eyes turn to the study at the end of the corridor as if they wished to follow Winters there.

Soon, Winters pushes the door to the study open and walks in to find...

A sharp and uncharacteristic scream of horror escapes the butler's lips.

A chill rises from the bottom of your heart, and the foreboding feeling you get grows increasingly stronger...

Suddenly, Butler Winters' screams can be heard from the estate study. Go check out what happened!

Luke is the first to reach the study. The door is ajar, and one hard push later...

A glance is enough to unfold the scene hidden within.

Butler Winters sits on the ground, trembling like a twig being tossed around by the winter winds.

Before him, an old man had collapsed onto the carpet and lies motionless.

Everyone here recognizes the old man...

He is the master of Blizzard Villa, the same person who invited everyone to the auction.

Luke bends down carefully to inspect the body, then shakes his head gently.

Winters: I don't know. I really don't! The master was already on the ground when I came in...

Winters's face is overcome with fear, and his words are incoherent. He is too frightened to speak in full sentences.

You: Butler Winters, let me help you to the side where you can get some rest. You can tell me later if you have anything you want to say.

Artem: I will go with you.

Winters is in shock. To avoid spooking him any further, Artem and you temporarily help him to the lounge next door.

Vyn: There are no obvious signs of trauma on Mr. Zeng's body, so we can rule out assault or external factors...

By the time you and Artem return to the study, Vyn is on one knee, inspecting Mevis Zeng's body with his hands.

Vyn: And the complexion on his face is normal, so there should be no signs of poisoning.

You had all suspected Mevis Zeng, his motives for hosting this auction, and wondered if Elijah Yin's death had anything to do with him.

At that moment, however, all these doubts seem to have been cast in vain.

The killer has become an unknown question mark, without a clue in sight.

What's stranger is that...

Mevis Zeng's expression seems calm and comfortable, without any signs of pain.

It is as if he just fell asleep...

Casey Cao: I told you! There is a snow beast on the mountain.

Casey Cao: Help! I don't want to be taken away by the snow beast. I want to leave the mountain!

Everyone looks at each other while a local Yuchen Town resident, Casey Cao, starts screaming hysterically.

She struggles to get out of the place but gets stopped by another local girl named Mimi.

Mimi: I told you, there's no such thing as the snow beast. Can you stop messing around?

One can never believe in something without reason.

Just as you're about to question Casey Cao for more details, Mr. Ji steps out of the crowd.

Mr. Ji: We don't know anything yet, so don't make things worse.

Mr. Ji's words stop Casey Cao and keep you from asking any questions.

In the study, Vyn continues his examination of Mevis Zeng.

Ten minutes have passed since Casey Cao's outburst, and Vyn is still kneeling on the ground, examining.

Vyn: This may require further and more professional examination by Dr. Lee.

You: Of course. I'll go find him now!

Luke was one step ahead of you.

None of you knew when he had left the study, but by the time you see him again, he was already back with Dr. Lee.

You: Dr. Lee, sorry for the trouble.

Dr. Lee lowers his gaze after a simple reply.

With Dr. Lee here, the examination of Mevis Zeng's body can officially start.

Vyn and Dr. Lee move his body to a separate, less crowded room for examination.

All of you wait in the study for the results.

For some reason, you can't forget the look on Dr. Lee's face when he saw Mevis Zeng.

You don't know if it's just your imagination, but his eyes looked like they were trying to avoid something...

Artem: What are you thinking about?

You: ...Just wondering when Dr. Lee and Dr. Richter's examination will conclude.

What you felt was just a hunch. It's not enough to accuse someone yet.

Artem: ...The conditions at the villa are limited. Vyn's examination will take a little longer.

Luke: Why don't we look around in the study for any suspicious clues?

Luke: Who knows, maybe we'll find something that's been overlooked?

At first, Elijah Yin's death might have been considered an accident.

But when the second victim appeared, that ship has sailed.

Everyone knew intuitively that Mevis Zeng' death would not be simple.

But the mystery of his death is shrouded in a fog, with people scratching their heads, unable to get answers.