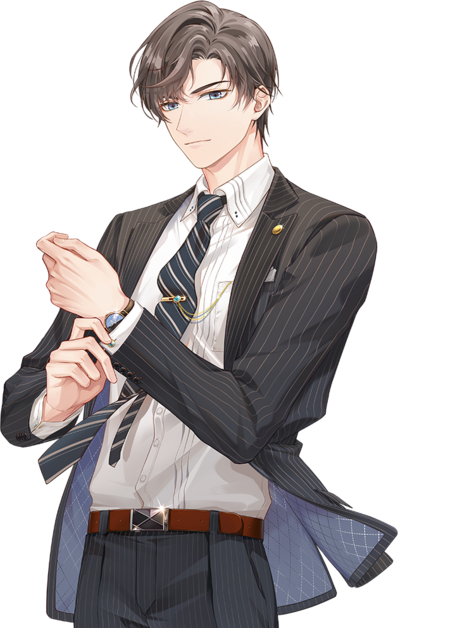 You Are My Themis
You were an unexpected addition to my routine life.
You're the first ray of sunlight in spring that brings forth new life.
Like how a sprout yearns to break through soil, I want to improve myself so I can support you through any adversity.
Before you and me lies a brand-new world, which may hold new uncertainties and challenges...
"But I wouldn't be the Artem you knew if I gave up so easily."[4]

An attorney who's rarely ever lost in his entire career, Artem's expertise runs across a wide range of fields in a display of his elite status among his peers. Attorneys joining Themis Law Firm and working under this senior can expect to meet highly demanding standards in their work. The media's evaluation of Artem is an emotionless defense machine, and there are many who aspire to become a lawyer as good as he is.[2] Little do they know, this is because Artem has grown used to suppressing his emotions and impulses; no one can even begin to imagine the kind of past he bears...[5][6]

In Stellis City, Artem is a legend in the industry. He is one of few elite lawyers with an expansive generalist expertise, and his win rate is tracked at 99%.[2][1] He is an individual who is able to maintain absolute rationality and keep a cool head at all times, treating himself with such high standards akin to self abuse. It is no wonder he reaches these achievements[2].

Artem is a graduate of Stellis University with a Doctorate in Law. He comes from a family where both parents--Bryan Wing and Kimberly Garner[7]--are leaders in the field of law, but his outstanding abilities are his own. Artem's win rate shows he has already surpassed his parents in popularity, and he is a rising star in the judicial world.[1] Nevertheless, if it's necessary to keep him and those around him safe, Artem will not hesitate to use his family's weight--particularly his father's, who is the country's Chief Justice of the Supreme Court--to make others hesitate to do him harm.[7]

In 2026, Artem received his doctorate in law[8] and was invited by Celestine Taylor as a Senior Partner to Themis Law Firm.[1] After joining, the scope of the firm significantly increased and the firm quickly rose in industry ranks[9]. No one has heard of Artem losing a case during his time in Themis, so there are speculation that it occurred before he joined[10].

Artem Wing is currently the youngest senior attorney in Stellis City, having passed the Senior Attorney's bar exam--a test with a 1% pass rate--with flying colors in 2029 at age 28.[1]

He looks up to his previous mentor, Neil Hume, who is currently missing; Artem holds many of the same beliefs as Neil, including believing in evidence first and wishing for a day when attorneys are no longer necessary, and he's noted to sometimes bear a similar kind of demeanor, tone, and power in his words as his mentor.[7] In the eyes of those around him, Artem is strict but doesn't treat people unfairly[11]; he's noted as being particularly good at evaluating the skills of his subordinates and assigning work fairly to those best suited for various tasks.[7] He does not typically work weekends but will do so if his workload demands it, and he'll occasionally pull all-nighters if it's necessary.[10] Upon arriving at work, he tends to review the daily news.[12]

Artem claims he is actually clumsy and always had velcro straps on his shoes as a child.[13] His mother fondly recalls his misconception that the government arranges all marriages at that age, as well as Artem's unwanted popularity with girls once he grew taller.[14] Neil often brought a younger Artem along to nursing homes and hospitals, claiming Artem had more in common with the elderly than with his fellow students.[15] When it comes to love, Artem says he's willing to wait as long as it takes for "the one" rather than settling for someone else.[16]

Artem's hobbies and interests include: 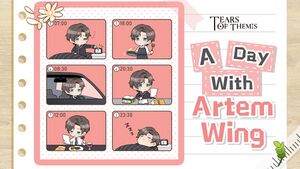 "I had breakfast at home, no need to prepare for me."

After work Artem and at work Laywer Wing are completely different. He will go into the kitchen when he's in a good mood. When he has some free time, will watch movies or go out for a joyride. But not many people get to see this side of him. Calm, strict, and unyielding is the impression most people have of Laywer Wing[27]

Artem Wing
"Sunshine After the Rain"

Artem Wing
"Two Hearts as One"

Artem Wing
"Fixated on You"

Artem Wing
"In Sickness or in Health"

Artem Wing
"Back to Business"

Artem Wing
"Here for You"

Artem Wing
"My Heart is Flying"

Artem Wing
"Patience is a Virtue"

Artem Wing
"With You"