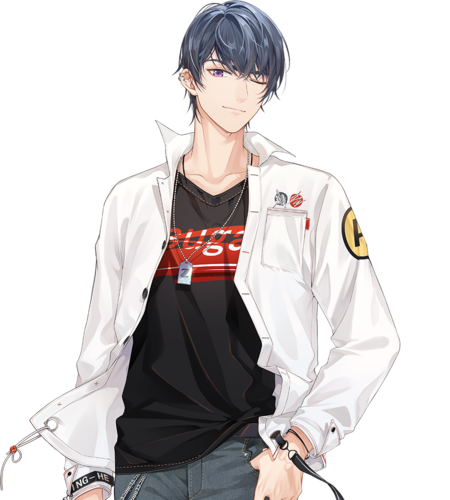 To My Princess
I had never cared about what anyone thought of me until I met you.
It's because I understand that a sincere and genuine heart is the most precious treasure of all.
Like a proud cat that shows its real face only to those it truly cares for.
And like a stubborn cat that will never let go once it decides to latch onto you. I hope you're ready...
"My lovely princess."[4]

Heir to a global corporation who yearns for freedom.

As the heir of a conglomerate, everything Marius does is exposed by the paparazzi or media, resulting in few secrets and many headlines. Among the citizens of Stellis City, his reputation is surprisingly very high. But, high reputation is not always good as paparazzi often like to make explosive allegations. The media reports him as a carefree and rebellious playboy, and the outside world calls into question whether or not Marius has the ability to inherit such a large family business.[2] The head of Pax Group and the von Hagen family does not comment, allowing public opinion and speculation to run rampant.[1]

It is difficult to understand this second young master. The inconvenient demands Marius must deal with every day are unimaginable. The public and secret battles against the top executives of the family conglomerate is not for the faint hearted. Moreover, he dislikes hypocritical social rules and refuses to give face to those who flatter and fawn.[2] Perhaps instead of inheriting the family business, he would rather be free and unconstrained in creating art. Marius has completed an undergraduate course majoring in oil painting at the reputable Florence College of Art and is presently studying in the art department of Stellis University. One may think this kind of young master is ignorant and incompetent, but Marius' paintings are absolutely amazing. If one has the chance, it is highly recommended to check out his exhibitions.[2]

If one doesn't see Marius' news and photos but meets him on the main streets, one may not necessarily recognize him. The family's second master's usual dressing appears like an ordinary person, rarely wearing luxury brands. Most of the time, he wears unbranded clothes. Regardless of the burdens and responsibilities of being heir to the Pax Group and being a gifted and talented artist, in front of those he is close to, he will express his childish side.[2]

Born into the epicenter of the struggles of power, Marius grew tired of the endless scheming and politics. It's an inescapable masquerade ball, and all Marius hopes for is for him to never find his ball partner and let him be the only one that gets sucked into this bottomless abyss.[5][6]

Marius enjoys good working relationships with his family and was set to inherit the Pax Group from his father, Austin von Hagen. However, his older brother, Giann von Hagen, was reassigned to an overseas project. The media reported this as a power struggle within the von Hagen family and called it the "Pax Civil War", which Marius denies.[7] Marius never knew his mother, Carenina Orinn,[8] who died shortly after he was born, but he feels a need to honor and protect her all the same;[9] he also grew up with close ties to Susan Wellington, or "Aunt Susan," who raised him and his brother after their mother died.[10]

Outside of his immediate family, he notes that the von Hagen family is large but neither close nor distant, only meeting at festivals once or twice a year;[11] some of this distance is imposed due to an incident that nearly led to Marius' death when a child from another branch of the family locked him in a basement freezer at age five, which led to Marius being raised in a spoiled and sheltered manner.[12] He once remarked that his father never punished him for doing anything bad as a child.[13].

Outside his role as the acting CEO of Pax, Marius is a skilled painter. He graduated with honors from the Florence College of Art[14], a time he describes as special and extremely happy,[15], and he has returned to Stellis for post-graduate studies in art and art history in addition to his duties at Pax. He credits Van Kerrel with beginning his interest in art, having attended an auction he ran at age five.[16]

To distinguish Marius from his brother, directors and veteran Pax employees refer to him as "Mr. Marius," while outsiders tend to buy into his rich brat persona and call him "Master Marius" or, more respectfully, "Mr. von Hagen."[17]

Marius is accustomed to his celebrity status and seems to not notice crowds of interested onlookers wherever he goes.[13] He has remarked that despite the impression of power most people have of him, he has far less power and freedom as a result of his identity.[16] In regard to the negativity of press and public opinion surrounding him, he believes "life is too short to waste on people who don't like us"[18]. However, when that same negative attention begins to affect those close to him, it's often enough to move him to action to protect them.[19][13] He's far more concerned with others' reputation than his own, especially that of his brother, since he hopes that once Giann comes back, he'll be able to leave Pax and start painting again.[20]

He never checks the price of anything he buys,[10] and he uses his money for philanthropic causes such as covering hospital bills for sick children.[21]

Despite his easygoing appearance and attitude, Marius' manner in business negotiations is sophisticated and sincere.[22], and those closest to him say that his skill is only partly due to talent, and that he works harder than anyone.[15] Compared to his brother, Marius is described as the more rational of the pair, better able to hide his joys and frustrations.[23]

Marius' hobbies and skills include:

Marius' painting idol, the anonymous "Z," is in fact Marius himself; he created the identity in order to separate himself from his art, so that people who see his paintings speak only about them rather than their painter.[36] Z's techniques are highly reminiscent of Rembrandt, earning Z the nickname "Rembrandt Jr."; Z's mystery and popularity cause news about him to spread even outside the art community, and his works fetch a high price among collectors.[37] However, since taking over at Pax, Marius has not had enough free time to release new paintings under his alias.[14]

Marius borrows lighting techniques from Klimt in his paintings, mixing gold foil with mica to soften the highlights rather than applying the foil directly to the painting; this was the key technique difference that proved a recent painting by Jason Sanders was a forgery.[38]

The trials Marius has faced in his personal story have made him more accepting of the fact that he can no longer preserve Giann's reputation at the expense of his own, and that his rocky position at Pax may be precisely because he tries to act unambitiously and gives the impression that he's incompetent. Now that he no longer sees Pax as a temporary burden, a freer Marius looks forward to the day he has a solid enough foundation there to continue to chase his dream and help those in need.[20] 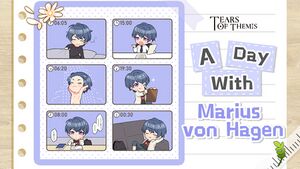 "Of course one must save time for leisure. For example, time for art."

There is always someone questioning if the frivolous Marius von Hagen can replace his older brother as the heir to Pax. The fact is, Marius must invest an extraordinary amount of effort to simultaneously balance commitments for Pax and his beloved art career[39].

With so little time in his schedule reserved for sleep, it's common enough for Marius to get tired in the middle of the day that he's developed a habit of taking a ten-minute nap whenever he's tired.[36]

Marius von Hagen
"All Through the Night"

Marius von Hagen
"In the Darkness"

Marius von Hagen
"Will of the Trees"

Marius von Hagen
"A Dance on the Clouds"

Marius von Hagen
"Falling into You"

Marius von Hagen
"Under the Silence"