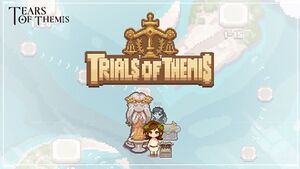 This game was developed by the Big Data Lab as a simulation for the bar exam.

Trials of Themis is a game mode similar to regular stages where players progress through levels of increasing difficulty in an 8-bit art style.

Unlike regular game modes, each level consists of two parts: A debate stage and a rewards portion.

The first wave will consist of two Typhoeus' Pitfall and an NPC. Selecting the NPC bring up the menu to start a debate stage. The debate stage is similar to other debate stages, where players use their cards to defeat the opponent's argument. Defeating the opponent rewards

S-Chips depending on how high the stage level is.

The second wave contains rewards, giving the player a choice between three different chests. These chests may contain

Oracle of Justice II x6, or a Trials of Athena chest.

The Trials of Athena chest will ask the player a question and three possible answers. Answering correctly will give the player both

Oracle of Justice II x6, while answering incorrectly will give the player nothing.

Playing through Trials of Themis will also unlock various difficulties for Temple of Trials. 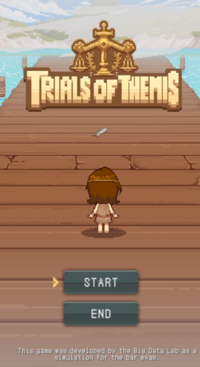 "Zeus... I will be back!" Typhoeus spat out black smoke as his gigantic body sublimated into thin air.

However, the evil aura that Typhoeus left behind enveloped the land and corrupted the minds of humans. The gods of Olympus were next to succumb, and their lands fell into darkness. To prevent Typhoeus' resurrection and to save Olympus, Gaia came to the reincarnated Themis in her dreams.

"Go save the world, my child!"

"Let the light of justice cleanse all evil!"

So, with the blessing of Gaia, you, who have just become an simple attendant of the gods, set out on a journey to cleanse the gods of Olympus, reclaim your divinity, and save the world.

DAVIS: Tap the portrait icon and enter the level to begin the challenge.

You wake up on a small islet. The waters of the Aegean Sea gently splash against your hands. You raise your head and gaze at the horizon. Under the azure sky, a lone temple is surrounded by a blazing inferno.

The shouts of the pirates pierce through the air. Their every word stings your nerves.

You hear a voice speaking to you:
"Embark, brave warrior!"
"Rip through the darkness and let the light of Zeus shine upon this land once again!"

DAVIS: Enemy sighted! You’ll encounter many kinds of enemies. Select an enemy to start debating! Each selection counts as a challenge wave. Finish this number of waves to clear the level. Obtained stage rewards are kept in [the bag]. You’ll receive them after clearing the stage. 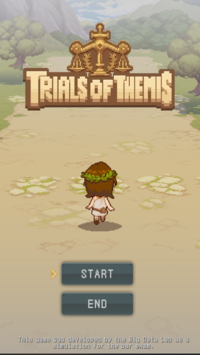 Trials of Themis (Coast of Naxos)

You have arrived at the coast of Naxos at sunrise.

The sun goes beyond the limits of the coastline, and its golden rays shine upon the grand temple at the highest point of the central city.

You squint a little for a better look, feeling excited.

Your gaze falls to the crumpling castle nearby. You can't help but sigh.

At the fringes of the forest, several injured travelers support each other as they make their way towards you.

Their steps slow to a halt before you, and they speak in a sincere tone.

"Young one, don't continue forward. Rogue Spartan warriors have occupied the castle. They won't let you pass even if you give them all your gold."

"Ah... Looks like it's one of the Spartan warriors from the castle..."

You limber up in preparation for your journey.

That voice sounds in your ear again.

"Forward, brave warrior!"
“Rip through the darkness and let the light of Zeus shine upon this land once again!" 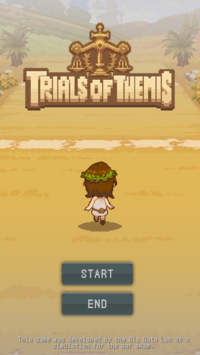 "Welcome to Amorgos Island. No one will come looking for you here."

You stretch your fatigued body as your eyes look to the clouds in the sky. At the horizon near the edge of the island, you see a white temple high up on the cliffs.

"Evil priests are sacrificing the innocent townsfolk to appease the gods."

It's that voice again.

"Forward, brave warrior! Save them before it's too late!"
"Rip through the darkness and let the light of Zeus shine upon this land again!" 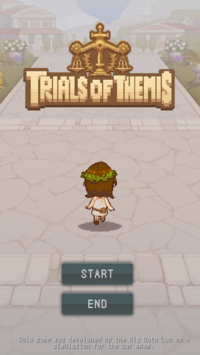 Evil High Priest: In the name of I, the high priest, I offer this sacrifice to the Almighty Zeus!

Freeing the imprisoned townsfolk, you let out of breath of relief.

"This arduous journey has finally come to an end."

You stare off into the distance and glance at the vast ocean before your eyes, looking forward to the times of peace to come.

As you walk up the steps of Olympus, you look up. Beneath the sky, a black fog envelops the once sacred temple. The grim and mocking laughter of Typheous can be heard from the mouths of temple elders, echoing through the temple.

"I am coming back, Zeus... I will become the true master of the world!"

As the frightening black fog begins to spread, there's a voice inside your heard that says:
"Continue onward, warrior! Push forward courageously, and let the light of Zeus shine upon this land once again!" 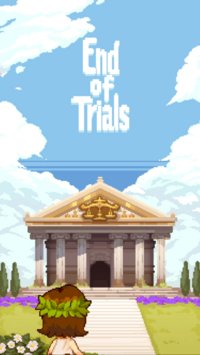 Trials of Themis (End of Trials)

Controlled Elder; Controlled Temple: My command is the will of Typhoeus!

The sky is clear and bright. Typhoeous's power weakens, and the temple elders are freed from its control.

A familiar voice whispers in your ear: "You have done well, my child."

"You have saved innocent people and Olympus."

The silence is broken by a song of the seagulls, and rays of sunlight shine through the clouds onto the island. This journey has finally ushered in the dawn of victory...

Notice: You have saved Olympus, bringing a victorious end of this arduous journey.