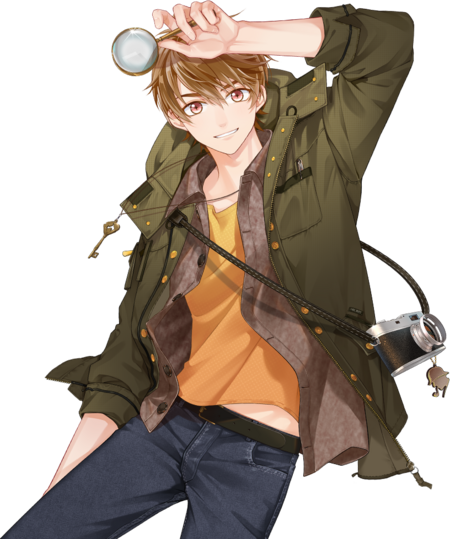 Being reunited with you is the most wonderful thing that's happened to me.
I never thought we'd be reunited here and now.
This photo album holds our childhood memories. Many of its pages remain blank, waiting to be filled.
Even if this is a prank played by fate, every second with you is precious to me.
Before the mystery's solved...
"Please, just give me a little more time..."[5]

A professional private investigator who's always a step behind when it comes to love.

A dear coral eyed[6] childhood friend. Though it has been so long, they are finally reunited. During the eight years he was away from Stellis City, our Main Character (MC) doesn't know what he's been up to, but he's learnt many skills including: tracking, sniping, fighting, tactical driving, and wilderness survival skills... skills useful for a private investigator. No matter the job, he will complete it cleanly and excellently under the eyes of the law. In the past, MC had thought he would be a scientist. With his intelligence, it would not be a problem to go in this direction... But, maybe something unknown occurred that altered the career shift[3].

An outgoing private investigator who brings light and hope to everyone around him. He's able to complete all kinds of jobs without breaking a sweat. There's almost nothing he's not good at... all except for expressing his love for the girl he grew up with... After being reunited after many years of separation, deep down, Luke is still the same old cheery but shy boy.[7][8]

Luke is described as an exceptionally bright, talented youth and childhood friend of the Main Character (MC). His mother was best friends with the MC's mother, so when Luke's parents died when he was very young, he was taken in and essentially raised by the MC's parents.[9] He went to school with the MC all the way from kindergarten to age 16.[10] Luke was a top student at school, attending national and international competitions such as the International Biology Olympiad in Prague,[11] and he was granted early acceptance into the prestigious National Central University. He was promptly recruited into a closed confidential national project, but the experiment disallowed any outside communication and he lost contact with the MC. He returned immediately after the project ended, but he did not contact the MC due to being busy with his work.

After graduating with a Master's in Bioengineering, Luke decided to pursue his dream of becoming a detective and opened Pearce Private Investigations. He also is the owner of Time's Antiquities, an antique store that serves as a front to his PI business.

He currently lives in a three-story house his parents left him, where the first story is Time's Antiquities, the second floor is his private investigation business, and the third floor is his residence. Luke also has a pet myna bird named Peanut, who is professionally trained and is highly intelligent.[12]

When he was a child, Luke dreamed of becoming a hero, making a charming appearance in times of need and beating all the bad guys. As he grew up, though, he realized heroes aren't always charming and glamorous and are often a mess instead. However, he still holds true to the heroic ideal of protecting those who need protecting[13] and tries to keep his focus on what good he can add to the world rather than be paralyzed by his inability to keep up with criminals who always seem a step ahead.[14]

Luke notes that his most treasured possession is a limited edition Sherlock Holmes box, in which he stores treasured possessions such as competition gold medals and models, which the MC's parents bought for him when he was five years old. He still calls the MC his "Watson" as a callback to their detective games while growing up.[10] Luke has been noted by the MC to have a habit of sitting on dirty floors[15] and has always kept his personal space an organized mess he calls "The Luke Storage Method" despite his ability to keep an acceptable appearance in public.[16] He has a high level of admiration for journalists who, like investigators, live for the truth and put their lives on the line to learn and expose it.[17] Luke is a diligent note-taker, and his habit of including his own remarks and complaints on the right side of the pages persists from his days as a student into adulthood.[18]

Luke's hobbies and interests include:

Very shortly after entering university, Luke accidentally got involved with a transnational case, which caught the attention of the National Security Bureau; he was recruited and spent most of the following eight years earning his degree from NSB instructors rather than attending university. The "secret project" discussed above was merely a cover story for his entry into the NSB.[26]

During a mission with the NSB, Luke was gravely injured by a toxic gas attack;[20] while his life was saved, he received medicine contaminated with an unidentified and harmful component during treatment. With what freedom the NSB grants him, Luke pursues the medicine's origin, which has led him back to Stellis on the trail of NXX.[26] As a result of his exposure to this contaminant, Luke only has 3 years and 2 months left to live;[27] it's for this reason Luke tried to avoid reconnecting with the MC on his return to Stellis. 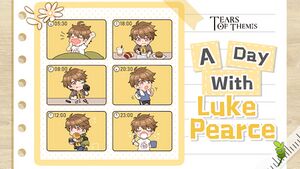 Aside from detective work, sometimes interesting commissions are received. Luke's week days are very regular. Everyday, he does morning run, evening run, and it looks like he wakes up very early... It is unknown how many secrets he has hidden in his diary.[28]

Luke Pearce
"Shape of You"

Luke Pearce
"Through the Heavens"

Luke Pearce
"Under the Milky Way"

Luke Pearce
"A Star in the Palm"

Luke Pearce
"Among the Great Blue"

Luke Pearce
"How I Remember You"

Luke Pearce
"Once Upon a Time"

Luke Pearce
"Together With You"

Luke Pearce
"Waiting for You"