On this leisurely afternoon, everything is pleasant and peaceful.
To celebrate the completion of the NXX HQ Garden, the team intends to hold a tea party... 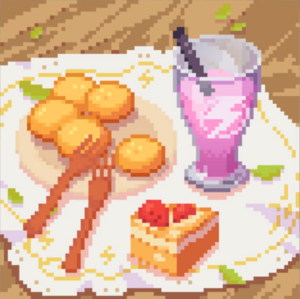 Sweet Afternoon Tea is a slide-puzzle based minigame; complete of a certain number of puzzles to obtain the Sweet Candy Furnishing for the Late Spring Garden Lounge set and the

Tea Time Badge! Players obtain one game attempt per day at daily reset time (04:00 UTC+9); this can build up to three banked clear chances at a time, allowing the player to obtain all rewards as long as no more than two days in a row are missed.

Unfortunately, as the slide puzzle is randomized, the wiki cannot provide puzzle clear guides to assist; sorry! However, there are two icons on the top right above the puzzle: the recycle icon resets the puzzle while the closed/open eye toggles for the final image. Players may infinitely reset and reshuffle the puzzle for easier start.

Cumulative rewards are available for completing a total number of puzzles as follows:

Thanks to everyone's hard work, the NXX Headquarters' garden is nearly complete.

You bend down and gently place the large bonsai in your hands by the dining table.

You: There we go.

You look around and see that everyone else has also just finished what they were working on.

Vyn looks at you from the stone steps. His chin rests on his left hand, as if he's deep in thought. Luke makes his way over.

Luke: What's got you so lost in thought?

Vyn: I did not realize that the manor's garden could be so well decorated.

Marius makes a questioning exclamation from the other side of the garden.

Marius: Did you forget who designed the layout?

Artem notices the awkward atmosphere and joins in the conversation.

Artem: I think everyone played a part.

Artem intentionally glances at you.

You hurriedly change the subject.

You: We finally finished decorating the garden, so let's celebrate!

Luke: Awesome! We've been at it for a long time, so we should take a break.

Marius: Miss, got any good ideas?

You: It's still pretty early in the day. Let's prep for afternoon tea together!

Vyn pushes up his glasses as if he had been preparing for this moment.

Vyn: It just so happens that after our previous riceball experience...

Vyn: I ordered a set of kitchen equipment that may be of use. Everything is already in the lounge.

Vyn: Such as an oven, a mixer, a digital scale, and a blender, among others...

Marius: Since when were you such a housewife...

You: Well then, let's split up the tasks!

Luke: Since all the appliances are ready to go, I'll blend all our cold and frozen drinks.

Luke: I've worked as a bartender while doing detective work, so I'm good at that stuff.

Artem: I learned how to make latte art during my spare time on the weekends.

Looking at Artem's serious expression, you can almost see him secretly practicing latte art at home.

Vyn: I will bake cakes.

Vyn: Their flavor will not disappoint.

Vyn smiles at you.

Marius: Then I'll get someone to send over the ingredients we need, and I'll take care of plating and decorating.

Marius winks at you.

Marius: I guarantee you a happy tea time, Miss.

You: Looking forward to it!

Everyone has something to do, so you can't slack off.

You: I'll bake some cookies and help you all out.

You: There's no time to lose. We better get started!

After a busy while, a sumptuous afternoon tea spread is ready.

You: Wow! I never thought that our homemade afternoon tea would look so fancy.

Marius: Of course it would. Doesn't my plating make you want to dig in?

Vyn: Appearances aside, I am confident that everything will be quite palatable.

Luke: Let's have a taste! After all, we worked hard to make all of this.

Artem: Take care not to burn yourself when drinking the coffee.

You try a bite of the cake before you. Its sweetness blossoms across your tongue.

Vyn: As I expected.

Vyn: I am pleased that it suits your liking.

Luke: If you want to try a different flavor, try some of mine.

Luke pushes his plate towards you.

Seeing this, Artem also takes up his own plate and offers it to you.

You: Of course I am!

Marius spears a strawberry with his fork and holds it up in your direction.

Marius: I can even feed you, Miss~

You: I really appreciate it, everyone!

You: But don't forget that this tea party is to celebrate us completing the NXX HQ garden.

You: Let's all give some well wishes to the NXX Investigation Team to commemorate this special day!

Artem: I hope we can continue to protect fairness and justice in Stellis.

Vyn: I hope we can soon discover the truth behind the increasing incidence rate of cases in Stellis.

Marius: I'm not as serious as you two. I hope everyone on our team always stays happy!

Luke: Me too. I hope everyone will always be healthy.

You: Since we've all made our wishes...

You raise the cup in your hand.

Everyone toasts in unison.