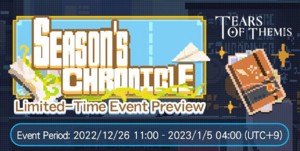 Chronicle your memories with him, and receive a badge of reminiscence. 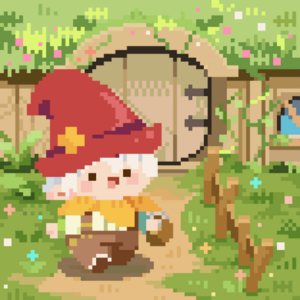 Season's Chronicle is a slide-puzzle based minigame; complete of a certain number of puzzles to obtain the

Memory Album Badge! Players obtain one game attempt per day at daily reset time (04:00 UTC+9); this can build up to three banked clear chances at a time, allowing the player to obtain all rewards as long as no more than two days in a row are missed.

Unfortunately, as the slide puzzle is randomized, the wiki cannot provide specific puzzle clear guides to assist; sorry! However, there are two icons on the top right above the puzzle: the recycle icon resets the puzzle while the closed/open eye toggles for the final image. Players may infinitely reset and reshuffle the puzzle for easier start.

Cumulative rewards are available for completing a total number of puzzles as follows:

It's finally the holidays! On this day, all NXX members have gathered at the headquarters to enjoy a rare break together.

You're resting on the soda and aimlessly browsing around on your phone. Suddenly, a notification catches your attention.

You: "My Year-End Review"... This has been pretty popular on the internet lately. Many people are sharing theirs.

You: Think of it as a mini summary activity! Many apps are also having similar year-end reviews.

You: You can see which song you have listened to or video you have watched the most this year, from the review statistics provided.

Artem: The song I've listened to the most? Let's see... Ahem.

Artem: I often listen to less popular songs, so nothing's worth mentioning.

Marius: I do have things to share. The e-book app I usually use has a year-end review summary as well.

Marius: It says I've read hundreds of hours of e-books on team management. How hardworking.

Vyn: Are you sure you didn't fall asleep the moment you open your e-book app?

Marius: Of course not.

You can feel the atmosphere in the meeting room getting a little... tense.

You immediately interrupt the two by changing the subject.

You: Speaking of year-end review, our NXX team has been to many places and experienced a lot of things this year.

You: I took many photos of the places we went to, and kept them as mementos!

The photo album originally placed on the cabinet is now lying open. The photos inside are scattered all over the place.

Luke: What's going on? The photos are in a mess... Peanut, was in your doing?

Peanut chirps sadly, as though telling its owner that it's innocent.

You: It's fine. We can tidy them up and take this chance to review our year!

After everyone places the photos into the album in order, you all start to look through it from the beginning.

Artem: At the start of the year, we went to Skadi Island, uncovering the hidden truth of the Manor of Hermes.

Marius: Later, we took the train to a foreign land for holiday, where we solved many local issues and cases.

You: In May, we went to Khaimit, exposing Ralph's lies and clearing up the conspiracy behind the Pharaoh's revival.

Vyn: After that, we assisted the police in solving the Sky Gladiolus theft case during the Stellis City Anniversary.

Luke: Lastly, we participated in the Stellis High School Open House, reminiscing over our campus days.

Marius: Come to think of it, we've had a really busy and eventful year.

Artem: I wonder what we'll face and where we'll be going in the new year.

You: Regardless of where we end up going, I'm certainly looking forward to it!

The "year-end review" ends with a lot of laughter and cheer.

Only Peanut is still chirping sadly, as if telling everyone that it is being falsely accused.

You: All right, we were wrong about you. Sorry.

You: I'll feed you dried figs later as an apology, okay?

Peanut chirps joyfully while flapping its wings. It seems satisfied with the apology.

Luke: But if it's not Peanut, then who is the culprit that messed up the album?

In a corner of NXX Headquarters, a robot vaccuum cleaner is "patrolling" around the room, randomly bumping against the table legs...