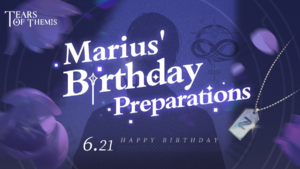 Stellin, and many other rewards.

Rewards for reaching various Inspiration Value threshholds are as follows: 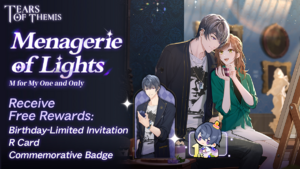 Story chapters unlock after a certain number of field investigations.

Players must conduct field investigations in the form of debates or inquiries in order to prepare Marius' surprise. Investigations may be conducted up to 11 times per day, after which the player will grow

fatigued. Maximum daily Fatigue cannot be increased and will reset with Daily Reset. In debate investigations, only Marius cards may be used. Each debate costs

AP x10. Debates spawn in sets of 3-4, where one is an Interview Event with an NPC; after these are cleared, a one-hour timer begins before another set will spawn. This timer may be bypassed using

While conducting field investigations, the player will also encounter participants who are to be given the interview. The participants will be asked about their reasons for participating, their views on art, and their opinions of the anonymous painter "Z."

See Interviews for text of these interviews.

Sincere Gift (Marius), decorations for the venue may be purchased.

Marius: The contest is finally over. Wanna go out and celebrate?

Marius: Come on, we need to reward ourselves for our hard work.

You: I agree. But what should we do?

Marius: A fancy restaurant, an amusement park, or a theater? Anything's fine.

You: Sounds great. I'll leave it to you then.

Marius: No problem. I promise you'll enjoy it.

You: Sorry, I already have plans...

Marius: Are you really gonna leave me alone?

You: Haha, I was joking. I'll be free, so just arrange anything you want.

Marius: Miss, you're the best!

Marius: By the way, about the birthday surprise you mentioned before...

Marius: Can you tell me what it is?

You: It's not going to be a surprise anymore if I tell you now.

You: Why don't you take a guess?

You: It's only called a surprise because you won't know until the last minute.

Marius: I'm so looking forward to it!

You: That makes me nervous.

Marius: Don't be nervous. Your sincerity is enough to make me feel happy.

You: I'm looking forward to it as well.

You: Can't wait for your birthday to come!

Marius: Alright. I'll see you on my birthday.

Marius: I had a great day because of you. It was the best birthday ever.

Marius: Me? I'm in the studio. I got some inspiration earlier, so I started painting.

Marius: "The latest work from artist 'Z' revealed after several months of silence." How does this news headline sound?

Marius: As for the topic... Ahem, I'll keep it as a secret for now.

Marius: Alright then, it won't hurt to tell you about it. Just... don't tell anybody else.

Marius: I want to create a painting based on the theme of "home." No advanced skills or fancy colors...

Marius: I just hope that it'll be a piece of work that will make people happy at first sight.

Marius: Haha, it's a deal then. We'll look at it together when it's done. I'll tell you all about my creative process. 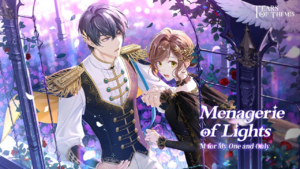 During the event Shadow of Themis, SSR

Marius "Crown of Glory" will have an increased draw rate.