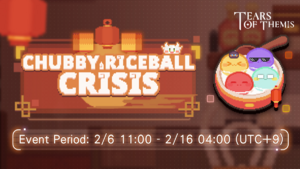 Come help us arrange these cute and colorful riceballs to obtain limited Cards and other generous rewards!

This event is a standard Memory game, in which the player flips over tiles with the goal of finding matches. If matching tiles are found, they are removed; if a match is not found, the tiles are flipped back face-down. There is no limit to the number of match attempts. Players may attempt the matching game twice a day, with more attempts allowed if a player spends

Riceball Experience Tickets x1; these are exchanged for

S-Chip x50 in the Mall during the event duration, however it is not necessary to do so unless a player starts the event quite late.

Each stage clear rewards the player with

Oracle of Justice III x5 and

Note: Extra copies of the R card fragments are NOT available for upgrading the event R cards; players are meant to use the 15 R-card stars of each male lead given at the end to assist in upgrading these cards to 5-star.

After your vacation ends, you arrive at headquarters for work as usual.

You: (We just had a long break after the last case ended. I'm really happy to see everyone again, but I can't believe my vacation's over...)

You put down the case file you were looking through and softly sigh.

Artem: What is it? A difficult case?

Luke: Are you not feeling well?

You didn't expect that your sigh would be overheard. You look up and see everyone looking at you with concern, so you hurry to explain.

Vyn: Are you having post-vacation blues?

Vyn: It is the mood that one may every after an extended vacation -

Marius: Of course I know what post-vacation blues are.

Marius: I'm just surprised that someone with your work schedule would understand such a thing.

Vyn: I am also a tutor, after all.

You: I'm fine, really! There's no need to worry!

Artem: Don't force yourself to work if you need a break.

Marius: Everyone likes holidays, right? The Riceball Festival is coming up.

Luke: It's a tradition to eat glutinous rice balls with your loved ones during the Riceball Festival, so you'll be happy in the future.

Peanut, who's visiting the headquarters today, chirps happily in agreement.

Vyn glances at you and Luke...

Vyn: Or everyone here?

Marius: We haven't gotten together in a while, so why don't we make rice balls together for the Riceball Festival?

You: Ooh, agreed! I've never done this before, but making such a meaningful thing with everyone will definitely be fun!

Artem: Are we doing it here?

Marius: The bar counter will finally be good for something. It should be fine for making rice balls and stuff.

Marius: But if Vyn and Artem disagree with that, then I'm more than happy to welcome you all to my place.

After the ingredients that were ordered online are delivered, you all start splitting up the work.

While you make the filling, the others use various ingredients to make differently colored rice ball wrappers.

Aside from the standard white glutinous rice wrapper, there are also purple sweet potato, orange pumpkin, and other such colored wrappers.

You: (I knew that Dr. Richter made desserts, but I didn't think the others would all be pretty good at this.)

Marius: Miss, have you made glutinous rice balls before?

You look around at everyone else's rice balls, then at your own.

Artem: Practice makes perfect. Don't worry, you can do it.

Vyn: Indeed. There is actually a trick to it. Allow me to teach you.

You: But the counter's so small. We won't have enough room if all five of us squeeze around it.

You: I'll exit the stage and plat a supporting role for you all!

Luke: Why don't you help me keep an eye on Peanut? It'd be a problem if he eats our rice balls.

You: No prob! Leave him to me!

After giving up on making glutinous rice balls, you start on a new project: adding artistic details onto the already-made rice balls.

You shape the leftover dough into different facial features and stick them onto the rice balls.

Artem: It does. You're really skilled.

Marius: Hey, Miss! You're so unfair! Why don't I get one?

You take the rice balls that you decorated and display them on the counter.

You: Look! I even made one for Peanut!

(Looks at Peanut, then looks at the Peanut-shaped rice ball)

Luke: It's adorable. I'll treasure it.

Vyn: I did not realize how talented you are in such things. We can make other crafts next time.

Artem: Ahem, I think we're done with the rice balls. We've made enough for all five of us.

Artem: But the only appliance we have here is a coffee maker...

Marius: Why don't you bring it out and see if we can find a new use for it?

You: Oh! I almost forgot!

You take out the utensils and mini cooker that you had previously placed in the cupboard.

You: Since we often stay here pretty late, I bought these and put them here so we could cook supper sometimees. We can use them right now!

You: Since I didn't do much in making the rice balls, I'll cook them for everyone!

Vyn: You are too considerate. In that case, we shall tidy up.

You pick up the box containing the glutinous rice balls and are about to move it aside when Marius stops you.

Marius: Hang on! Miss, the rice balls you made are also mixed in there.

Marius: I'll be hard to tell the flavors apart if you cook them all together.

Luke: Yeah, and I wanted to keep mine.

After sorting through the rice balls, you finally finish boiling them.

You: Try them out! I'm not a dessert expert, but I think they look all right!

Vyn: For your first time, you have done excellently.

Luke: I'll practice a few more times with you! Careful, they're hot!

Marius: Well Miss, which ones did you make~?

You: Marius, I have plenty of riceballs to silence you with if you don't hurry up and start eating.

Though everyone expressed their confidence in your cooking, when you all begin eating...

Vyn: I suppose there are other customs aside from eating glutinous rice balls.

Artem: Yes. Lantern-viewing, lantern riddles, releasing lanterns, and the like. We can light and release sky lanterns to wish for good fortune.

Marius: I'll get someone to deliver materials right now.

You nod vigorously while gulping down water.

But as you glance over the messy counter, your frustration returns.

You: It's all my fault for mixing up the salt and sugar...

You: And we have so many ingredients left over...

Artem: No, we were all involved in making them. So we are all responsible.

Vyn: Let us do something else for today. We can keep these ingredients and try again tomorrow.

Luke: Anyway, we still have a few days until the Riceball Festival. We'll definitely be able to make tasty rice balls.

Marius: I'm willing to try any good as long as it's made by you, Miss~

You: We didn't manage to make yummy rice balls, but it was really fun to spend time with everyone. I hope we'll always get to be together like this!

You: Let's do our best on the next few days as well!