Mysteries of the Lost Gold 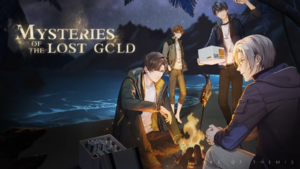 The veil lifts from the mystery of an ancient legend...
Unknown dangers lie on the journey ahead—

Players during the event explore a hexagonal map to unlock resources and rewards as they follow the characters in Nosta.

Nosta's map is a hexagonal grid consisting of several stage types: primarily these are Story Stages and Exploration Stages. Each tile costs some amount of supplies to unlock (listed below); tiles which cross "Border Checkpoints" unlock in pairs, and the cost needs only be paid once for the pair (for example, unlocking Lost Gold Story 01-07 also unlocks Explore Nosta Forest VII for "free"). 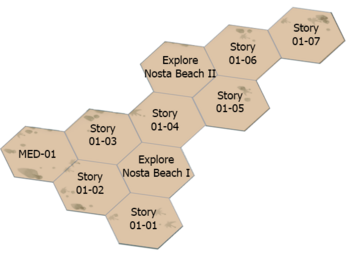 Unlocking all tiles on the beach requires

Drinking Water x475. The player begins the event with 500 of each resource, and the remaining lumber is part of the work order tutorial, so it's possible to unlock all Beach stages immediately. 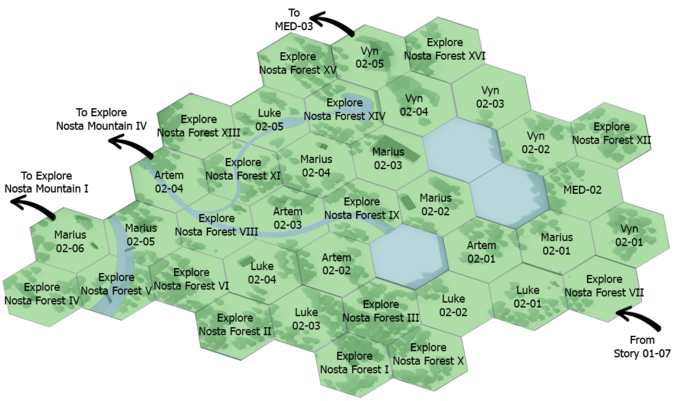 Unlocking all tiles in the forest requires 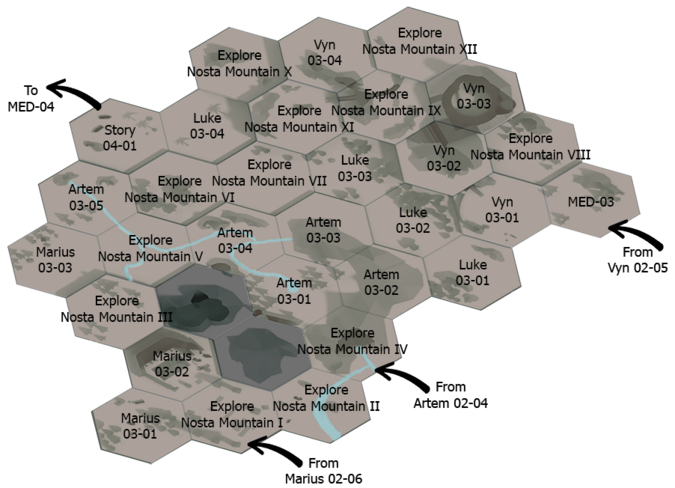 Unlocking all tiles in the mountain region requires 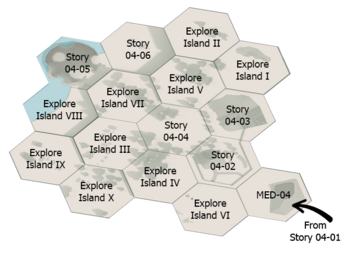 Unlocking all tiles on the outer island requires

S-Chips on first clear as well as

There is one Mediation stage per region.

MA7 Locator x1 to scan the map to find contestants to debate against. Defeating them rewards a large amount of 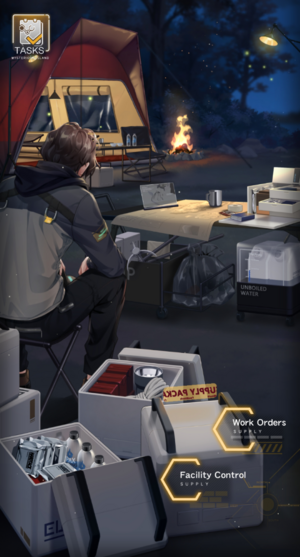 Upon completing the first Exploration stage, the player will gain access to Facility Control, where

Universal Part may be exchanged for buffs to influence, defense, and resource gathering throughout the event.

The Workbench boosts Defense of all cards by a given % during event debates.

Supply boosts resources gathered by all characters by a given % during event tasks. Requires Workbench Lv. 3.

Tent boosts Influence of all cards by a given % during event debates. Requires Workbench Lv. 3

Work Orders are unlocked after completing Lost Gold 01-06 and generate supplies over time for unlocking additional land area tiles in Mysteries of the Lost Gold. A player can assign each of the four male leads to an item. Unlocking all map tiles requires approximately 20,000 of each resource type. Each of the male leads has his own specialty when it comes to gathering supplies. The available supplies, their default guys, and their timings are as follows:

*MA7 Locator is unlocked after completing all land areas.

When all 98 areas of Nosta are unlocked,

MA7 Locator. A total of three can be held, each requiring 24 hr to find. The previous resources can no longer be selected. After Sept. 14, the Speed Up option for Work Orders will be available.

Badges and other items may be obtained from event tasks as follows:

Here, the player may re-watch any event story scenes previously viewed and review clues and useful items collected throughout the island.

For Hearts and Mysteries - Event Shadow of Themis[edit | edit source]

During the event, the exclusive SSRs

Marius "In the Darkness" are on a rotating rateup schedule as follows: 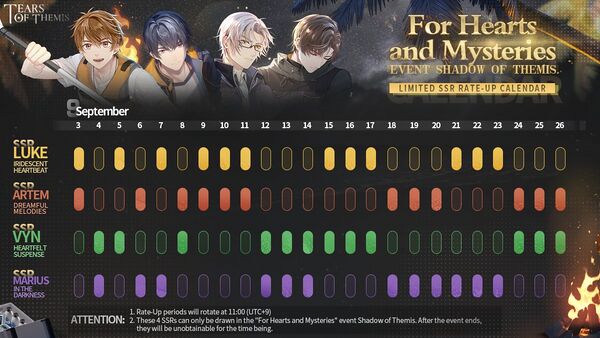 Hunter's Badge x8,870 is needed for the Graduate Shop,

Hunter's Badge x30,880 for the Senior Shop (excluding the expensive

Stellin and Oracles), for a total of

Hunter's Badge x69,930 is required to purchase the remaining Stellin and Oracles. 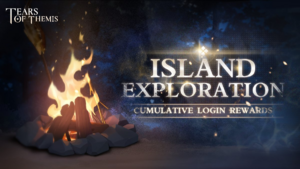 Players who log in during the event receive the rewards below based on the number of cumulative logins: